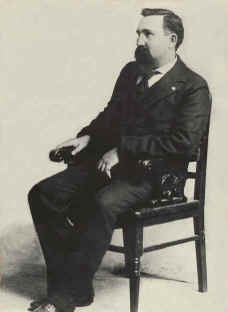 The San Diego, Cuyamaca and Eastern Railroad ended at Foster Station – Joseph Foster’s ranch three miles north of Lakeside where San Vicente Dam is now located. It was the dream of Robert W. Waterman, Governor of California from 1887-1891, to build his railroad to join with the Santa Fe and also with the Southern Pacific Railroads, to have a transcontinental link for San Diego. When the line was extended from Lakeside to Foster in 1892, the settlement around Foster’s Ranch grew and in 1893, was granted a post office with Angel M. Corona as postmaster.

Not much was known about Joseph Foster. He said that he was born in Sacramento on August 15, 1856. He came to San Diego County November 14, 1868 when he was twelve years old.

The late Charles Kelly of Carlsbad said that two brothers named Foster claimed government land near the mouth of San Dieguito Valley. These brothers adopted Joseph and sent him to the same country school as the Kelly children.

Later Joseph boarded with a man named James Johnson and herded sheep for him. Joseph kept a very precise diary telling of the number of sheep sheared and of the flock at Cuyamaca. He told of selling sheep, killed and dressed, to the Stonewall Mine for two dollars each.

Joseph married Martha Swycaffer in 1880 and they acquired a ranch three miles north of Lakeside. He became an active and well known person in the county, being appointed as road overseer of San Vicente district in 1883.

In 1885 a newspaper reported the Foster had delivered fifty-one cases of honey from his apiary ‘halfway to Alpine’ to Klauber and Levi in San Diego.

When the railroad came to Foster, Joseph and Frank P. Frary, one of San Diego’s mayors, organized a stage line which took the train passengers up to Julian or Banner. Later only Foster ran the lines and continued to run the stages until 1908.

Joseph and Martha had two children, Arthur and Lulu who was born at Foster April 28, 1882. The children grew up, Arthur to help his father run the stage line and Lulu to assist her mother cook meals for the stage coach employees and the passengers of the railroad who stopped over at Foster Station.

Also spending their early years at Foster with their aunt and uncle were Homer and Katie Nicholson. They came to live there when their mother, a Swycaffer, died. Katie later became Mrs. John Leng and lived most of life in and her grandchildren. Homer also spent his life in Lakeside.

James A. Jasper represented the people of the east county on the County Board of Supervisors. At that time San Diego County extended to the Colorado River. In 1905 Jasper resigned. On January 5, 1906 Governor Parde appointed Joseph Foster to fill the vacancy.

He was elected and re-elected until his retirement January 2, 1929. During this time he became known affectionately as “Uncle Joe.” To show that affection, the county employees gave him a retirement party – a real whopper!

Uncle Joe became known all over California and was President of the State Organization of Supervisors. He was Chairman of the Board for fourteen years, more than half of the time he served.