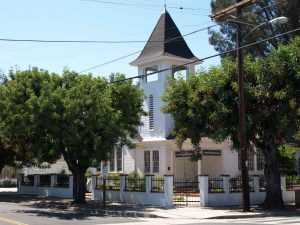 Lakeside’s first church was organized in 1883 with 13 charter members. Worship services were conducted on the porch of the old Lakeside Inn, which was located approximately where the Lakeside Post Office now stands.

In 1895 construction began on the sanctuary which still stands as a familiar landmark at the corner of Parkside Street and Maine Avenue.  It is now designated as an historical site within the Presbyterian Church.  The first service in the new sanctuary was held February 9, 1896, and formal dedication was March 29, 1896. 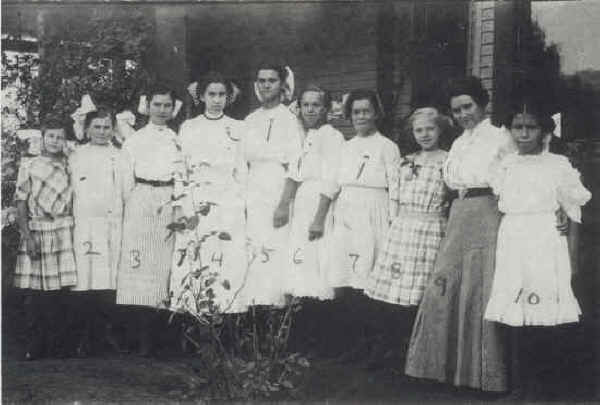 A Sunday School wing was added to the north side of the sanctuary in 1914. From 1914 to 1953 this addition was also used as a social hall on week days.  After 1951 it became an extension of the sanctuary and additional Sunday School space needs were met by renting from 1951 to 1954 what was then known as the Kiwanis Building (located on Woodside across from Cecil’s Restaurant).

In 1948 two surplus Army barracks were added to the west side of the sanctuary and this became known as “the Annex.”  For the first time, with this addition, bathroom facilities were added.  The Annex served primarily as Sunday quarters for the Kindergarten Department, and later housing for day pre-school.

The Manse, perhaps more commonly known as the Parsonage, was placed on the property circa 1913.  In 1949 it was remodeled for use by the church school on Sundays and administrative offices on weekdays.  This building now houses the Lakeside Chamber Commerce and is directly west of the sanctuary and faces Parkside Street.  In 1931 the former Manse garage was expanded and remodeled into a classroom.

The Manse was again restored in 2004 to accommodate our new Lakeside Museum.

After the original Town Hall became a theatre November 22, 1941, many community meetings were held at the church, including numerous public events. Graduates of Lakeside Junior High School in the 1940’s and early 1950’s will remember the annual baccalaureate services which were conducted in the buildings by the students in mid-June.

History of the bell is not complete.  However, according to recollections and perhaps a few assumptions from Theoderic “Ted” E. Roberts, Jr., pastor of the church from 1946 to 1981, thinks the bell was installed when the church was constructed in 1886 and the cupola built around it.  Structural changes were made years later, so that now only the clapper moves and the bell remains unmoved when the bell is rung.

The bell traditionally summoned people to worship each Sunday. Prior to the end of World War I, women of the community gathered daily at noon and the bell was struck seven times, spelling the word “victory,” followed by a moment of prayer for victory and a righteous peace for our country, the president of the United States, the American soldiers, and the triumph of Americans and Allied Forces.

Lakeside was given credit for starting this practice which was followed by other churches throughout the nation.  During the 1976 bicentennial, the bell was rung before the bicentennial service of worship held July 4 at the old church.  All of those who wished to, could try their hand at ringing the bell.

It became evident that the growth of the church necessitated more expansion.  So, in 1953 the first unit of the Christian Education Building was constructed on Channel Road property.  Two acres of this parcel had been donated by the McClain family in 1950, and the adjoining 2.58 acre parcel was purchased by the church in 1952 to create a building site of 4.59 acres.  This is the present location of the new sanctuary.

The Open Door for Dialogue Through the Arts was organized in 1965 and space in the original church building was rented to develop an art gallery, little theater, coffee house, and other community services.