A Friendly Place to Visit

At the time the El Cajon Valley Land Company began to promote Lakeside as a town site in 1886, there were few inhabitants in the area. It was 1859 when the Ames family moved into the Los Coches area. There was the Pedrorena Rancho near what is now the center of town. In 1869, the Ferry Ranch house was constructed in Lakeside Farms and the Ben Hill house was built on what is now Willow Road and Wildcat Canyon Road. Other ranchers moved into the area — the Kuhner’s in 1881, the Philbrooks in the early 1880’s. Although construction of the Flume was in progress in 1883, it wasn’t completed until 1889 and the only means for watering gardens and small orchards was windmills.

Small businesses began to spring up — Beamer’s Stable and Blacksmith’s Shop, a boarding house that later became the general store, a butcher shop, a school was started, and to take care of the spiritual needs of the new town, in 1895 a church was built on Maine Street. San Diego’s population grew from 7,500 in 1886 to 25,000 by November 1, 1887. With the building of the Inn in 1887 and the construction of the railroad, Lakeside became a resort town. Twenty-six miles of this railroad line became the most traveled in San Diego County. Governor Waterman became its sole owner in 1890. Before the railroad, there was a daily stage between Lakeside and San Diego which took four hours for the trip.

In the July 9, 1937, issue of the Lakeside Farmer, Dick Henderson made these observations: “My first recollection of the Lakeside Hotel is finding shelter there from a heavy shower, which caught my mother and a lady friend and I up in El Monte and got us well soaked before we reached shelter. Mother was taking up a ‘pre-emption claim’ on Boulder Creek, above the diverting dam, and she and I spent a winter there. Six months residence was required to get title. That was 50+ years ago. Lakeside was the center of activity of this region. It is much different from Lakeside in 1898, with its paved highway and autos standing on both sides; but as Otto Marcks remarked a few days ago, there was lots of business in the old days.”

Outlying areas formed their own personality. Foster was a small town, completer with post office and depot. There was Dexter Valley, El Monte, Riverview, Winter Gardens, Lakeside Farms, Eucalyptus Hills, and Lakeview. There were no boundaries to guide you, but you knew when you were there.

Take a look at the Lakeside CA Street Names  (You will need Adobe Reader or a pdf reader to view this list.  You can download Adobe Reader here.)

The beautiful archway of Cork Elms at the west entrance to lakeside is believed to be the only lane of these huge old trees in the United States. They were planted on Arbor Day of 1893 by the pupils of the first school in Lakeside. The trees had been imported from Australia by the El Cajon Land Company.

Spreading branches of these historic old cork trees formed an archway of scenic beauty over Woodside Avenue. Their cool inviting shade has welcomed the traveler to lakeside since the horse and buggy days.

In their native country, Australia, the cork bark grows much thicker and is used commercially. Only a limited area of bark is harvested periodically and the harvest does not injure the tree. They are unique in the fact that they bear no flowers or seeds, but propagate themselves by offshoots from the roots — if left alone they would soon have become a veritable jungle. A few of these shoots have been planted in Lakeside and were growing into fine trees. A plan was formulated whereby this growth could be saved and given to those who would plant them on their properties.

Since about 1917, a large nursery in Oneca, Florida had been importing these Cork Elms from Australia, and they were being planted throughout the south. However, it has been learned that those trees have not grown to the size of the Lakeside Cork Elms.

In the past these cork trees have been mutilated and threatened with destruction many times. For many years it had been the practice of the gas and electric company to top about ten feet from the south lane of trees, giving them a hedge-like appearance. However, in 1946, the citizens of Lakeside, with the aid of public officials, persuaded the gas and electric company to move their power lines to a different location. After that, the trees again grew into a beautiful archway.

The Cork Elms along Woodside Avenue became Flossie Beadle’s focal point, and from 1946 on, she made a supreme effort to save the trees. Sadly it failed. Again in 1965 she gained recognition when she led a citizen’s group in preserving the Boathouse. She was honored as Lakeside’s Woman of the Year. The Beadle place on Ashwood St. was the setting for Flossie’s Museum. One of the buildings was formerly the La Mesa Train Depot, which has now been returned to La Mesa and restored.

Originally there were about fifty trees on each side of Woodside Avenue. On February 6, 1956, seven of the beautiful old shade trees were cut down from the south lane for entrance to a proposed shopping center (Safeway/Vons). Previously the promoter had made many promises that the trees would be preserved as an asset to the shopping center. In 1967, the last of the Cork Elms were cut-down. 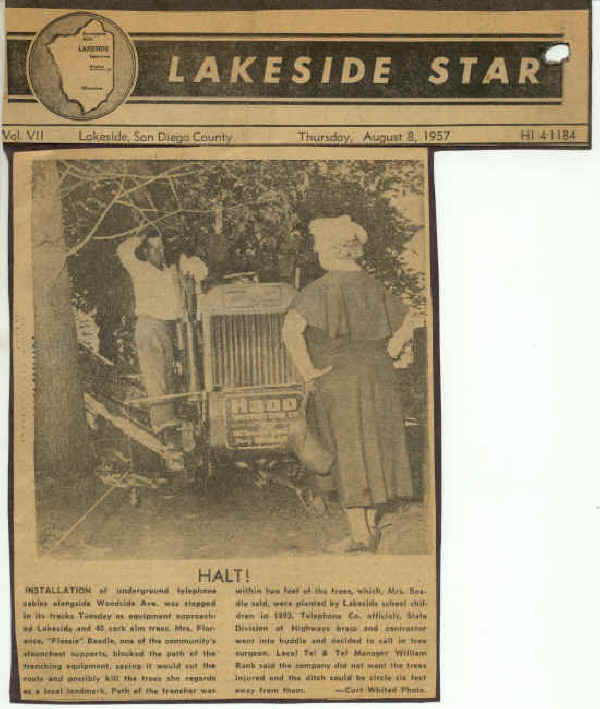 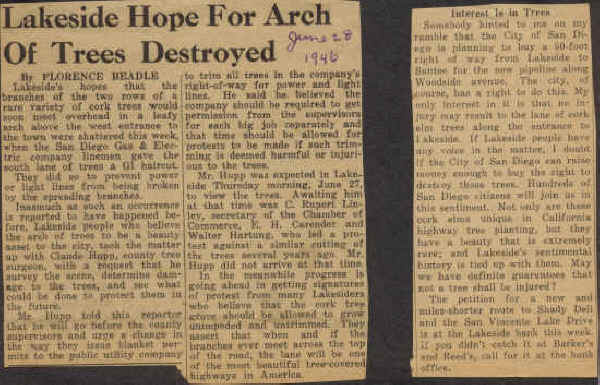 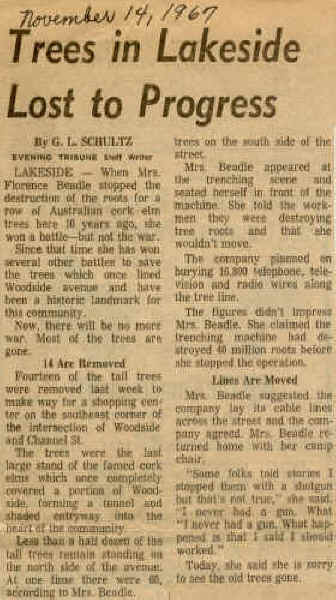