The Lakeside Inn was built by the El Cajon Land Company in 1887. This was the company that subdivided and laid out Lakeside’s town site, dedicating 45 acres of land, which included Lindo Lake as a public park. The Boathouse was built in 1887, at the same time and in conjunction with the long-gone Lakeside Inn.

Captain Joseph Smith managed the Inn for the land company for a number of years.

In about 1900, the Inn was sold to Father Henry Eummelen and Tom Fisher. Father Eummelen, a Catholic Priest, was also a noted doctor and established the Kneipp Sanitarium in connection with the Inn. His Kneipp Water Cure for rheumatism and paraplegics was similar to the now famous Sister Kenney Cure. The sanitarium consisted of hot baths and water exercise and was located in back of the Inn in a number of wooden buildings.

The eighty rooms in the Inn were spacious — single or suite — with large windows which afforded plenty of sunlight and a view of the beautiful surrounding mountains. There were electric bells, gaslights, and telephones. There was a spacious and warmly decorated lobby. A system of gas and sewerage, including the baths, was complete. The architecture was similar to the Hotel del Coronado, so the Inn was frequently referred to as “The Coronado of the Hills.”

Cuisine at the Inn was considered outstanding as the 300 acre farm owned by the Inn furnished garden fresh vegetables. Eggs were fresh from the hennery with Jersey milk and butter provided by their dairy and the squabs from the loft.

Livery service was complete with carriages of all descriptions. There were saddle horses, many suited for children, ladies and sportsmen. Rates at the Inn were $10.00 per week or $2.00 per day, with special rate for nurses and children.

John H. Gay bought the Inn in 1904. He fenced the park and claimed it as part of the estate.  He laid out a 60-foot wide racetrack that was especially adapted for automobile and horse racing. The track circled the lake.

Some of the area old-timers remembered that the land and lake had been dedicated as a park. They proceeded to bring suit for its return. After many long court battles, the County of San Diego regained possession of the park May 11, 1919, and it was again open to the public rather than for the exclusive use of the Inn’s patrons.

While the park and lake — its principal assets — were in litigation, the mammoth four-story structure lost its value as a resort hotel, and in February 1920, the Lakeside Inn was torn down after many years of idleness. 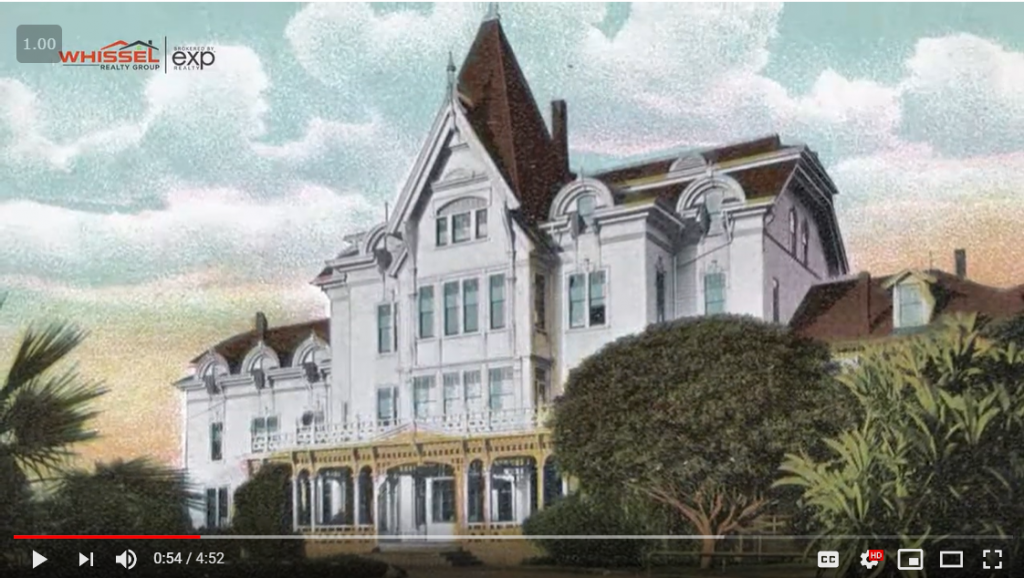 Local Men in charge of contractor Ben Hawkins Fill Town With Noise of Destruction as Lakeside Inn Comes Down; Same Crew Will Follow With Building Improvements

Perhaps among the most important happening around Lakeside, or even in the entire county, is the wrecking of Lakeside Inn – formally one of the high-class hostelries of southern California and known far and wide.

The building – a mammoth, four-story structure containing 150 guest rooms and every convenience to make it modern was designed along the lines of Hotel del Coronado, and, we understand, by the same architect. It has been advertised in the past as “the Coronado of the mountains.”

The grounds included Lindo Lake and Park, whose ample acres furnished boating, duck shooting, golf, and other recreations for guests. The tables were supplied with meat, poultry and vegetables home grown. The mineral springs contained medicinal properties which were known world wide. The beautiful grounds and the race-track were the scenes of parties galore where celebrities and millionaires met and played and were happy, and Lakeside profited by their presence.

But today things are different. Men are at work from top to bottom of the building with screw-drivers, hammers, bars, and other wrecking tools and the old land-mark is being razed. And it is right and well that such a course is being followed, for long since its value as a hostelry has been lost and many years have seen it lying idle and slowly going to wreck. The park and lake which were its principal assets entered into litigation and are now the property of the county. Hunting is now open to the public and Lakeside citizenry are planning a general park and lake clean-up day. Water has again been turned back into the lake through the natural run­way shut up by the building of the race track and a few good rains will bring the water up to its proper height and clarify its body.

Mr. C.S. Judson, the present owner of the property, has closed a contract with Ben Hawkins for the wrecking of the building, the disposal of materials, and the immediate erection of two cottages. The writer of this article is exceedingly well pleased with the present disposition of this estate – when the entire holding is eventually cut into small tracts with a home and family occupying each, then, indeed, will Lakeside profit.

Following World War I, building materials had soared in price so that the lumber from the Inn brought more cash than the original cost of the building, which was about $50,000.00. Much of the lumber went into homes which were being built at the time. Where LePire Insurance Agency now stands (1986), some of the lumber was used as well as the McClain’s on Woodside Avenue. Also, the Forest Lucas house on Maine Avenue, which was removed in 1985 to make way for two business rentals.

Tom La Madrid Lakeside Blacksmith, claims to have gotten the prize bargain. He bought 18 heavy doors, 10 feet high, for $1.50 each, which included rollers. They had been used between the dinning room and the lobby when the doors were rolled back, making it one large room. Two of the doors were used on Tom’s Blacksmith Shop and were covered with brands of many ranches in the county. The other doors were used for partitions in a shed in back of his blacksmith shop.

Many thought the Lakeside Inn had burned, but this was not true. In 1906, a two-story servants’ quarters in back of the Inn burned as a result of a Halloween prank which was responsible for the unfounded rumor.

Another historical building whose beauty could now enhance our area is gone. How nice it would have been to have held onto this part of our Lakeside heritage.