The Lindo Hotel was built in 1887 by Martha Swycaffer, mother of Jeff Swycaffer of Balina. She and her husband, Joseph, were married in Old Town April 27, 1857. The narrow two-story building was situated on the south side of Sycamore Street behind the Old Lakeside Store. It was started as a boarding house for construction workers on the San Diego – Cuyamaca Eastern Railroad which extended at that time as far as Santee. Mrs. Swycaffer had previously run a boarding house in Santee, but moved to Lakeside in order to be more in the center of the railroad work. The right of way ended in Lakeside, but a spur line was laid to Foster. The hotel originally had four bedrooms upstairs, one large bedroom downstairs, and a kitchen and dinning room. She had a Chinese cook.

About 1893, Mrs. Swycaffer moved the building to its present location on Sycamore and River Street. She continued to run a boarding house there for a number of years. In 1900 it was leased to the Martin family, who turned it into a grocery store and Post Office for approximately five years. Charles Greenleaf also used it for headquarters for his stage line to Alpine, Descanso, and Cuyamaca. 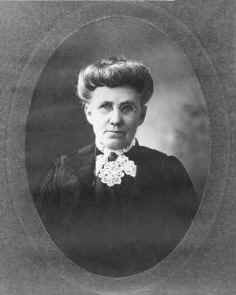 In 1905 Mrs. Swycaffer and her daughter, Nettie, came back to Lakeside and used the Hotel as their residence.  Another daughter, Mrs. Beatrice Price, better known as “Beaty” or “Aunt Beaty” took over in 1908 after the death of her father.  Nettie died in 1906. Mrs. Price made many changes.  She built a two-story addition with six bedrooms upstairs, three bedrooms downstairs, a parlor and an office.  A long covered wooden porch was added across the front and south side, and a white picket fence with climbing roses completed the pleasing appearance of the Boarding House. Mrs. Swycaffer died in 1924, and Aunt Beaty continued with the operation of the Hotel until her death in 1934. Her sister, Mrs. Frances Corona, inherited the Hotel and ran it for three years before she sold it, ending 54 years of the Swycaffer ownership. 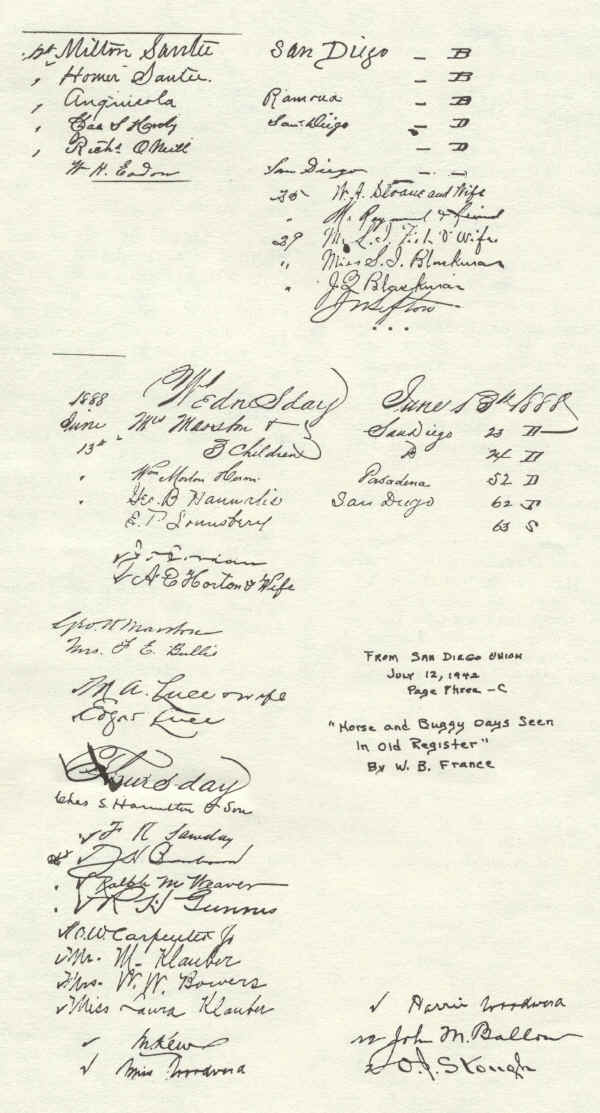 In 1941 Mrs. Corona sold to Clark H. Thompson and Eldon G. “Curley” Petzoldt. In rummaging the Hotel’s storage places, they found the old register beginning with the date May 1888, and ending September 1889. It was a “husky” book two inches thick, 12 inches wide and I8 inches long. Once it had a page-size blotter bound between each two pages. It carried advertisements at the bottom of each page from the San Francisco Chronicle, the San Francisco Examiner, Peruvian Bitters and many others. A look at some of the registrations is a history lesson in itself. There was a guest from Spokane Falls , W. T. (Spokane, Washington Territory, because Washington was not admitted as a state until a year later, November 11, 1889). There was one from Yuma, A. T., for Arizona was not a state until February 14, 1912 Jersey was not New Jersey, but the English Channel Jersey, the island where the cows came from. Londo led the foreign registrations, but guests were registered from Ireland Scotland, Spain, Mexico, Canada, China and Samoa. In the United States geography, virtually all of the big eastern and Midwestern cities were represented, also many of the smaller ones. San Diego, naturally, appeared most frequently, but Boston seemed to lead the more distant places. The names of the register recall the part of San Diego’s past which laid foundations for its present. Perhaps chief of the old-timers who signed the register was A. E. “Father” Horton, who came to San Diego in 1867. There is also C. J. Stough, who lived to be more than 100 years of age, and had his picture in the Union on his birthday every year after he was 95.

On a special column on the right of each page were recorded the Lakeside Hotel’s other guests – “I horse, or 2 horses.